In 1932, after a failed film project in Moscow, Langston Hughes visited the newly Sovietized Turkestan with a troupe of African American artists and activists. He rode the Turksib (Turkestan-Siberian railroad) from Moscow down through Kazakhstan, to Uzbekistan before jumping off the train in then a small rural stop, Ashgabat. He left the safety of a guided train tour with his record player, jazz albums, and notebooks to make up his own mind about Soviet Central Asia. Hughes did not speak a word of Turkestani, nor Russian, but armed with French and English, he managed quite a tour of Uzbekistan and Turkmenistan, built friendships with Russian and Turkestani writers, and wrote one of the first Soviet-commissioned works, a chapbook in English and Russian titled, A Negro Looks at Soviet Central Asia. 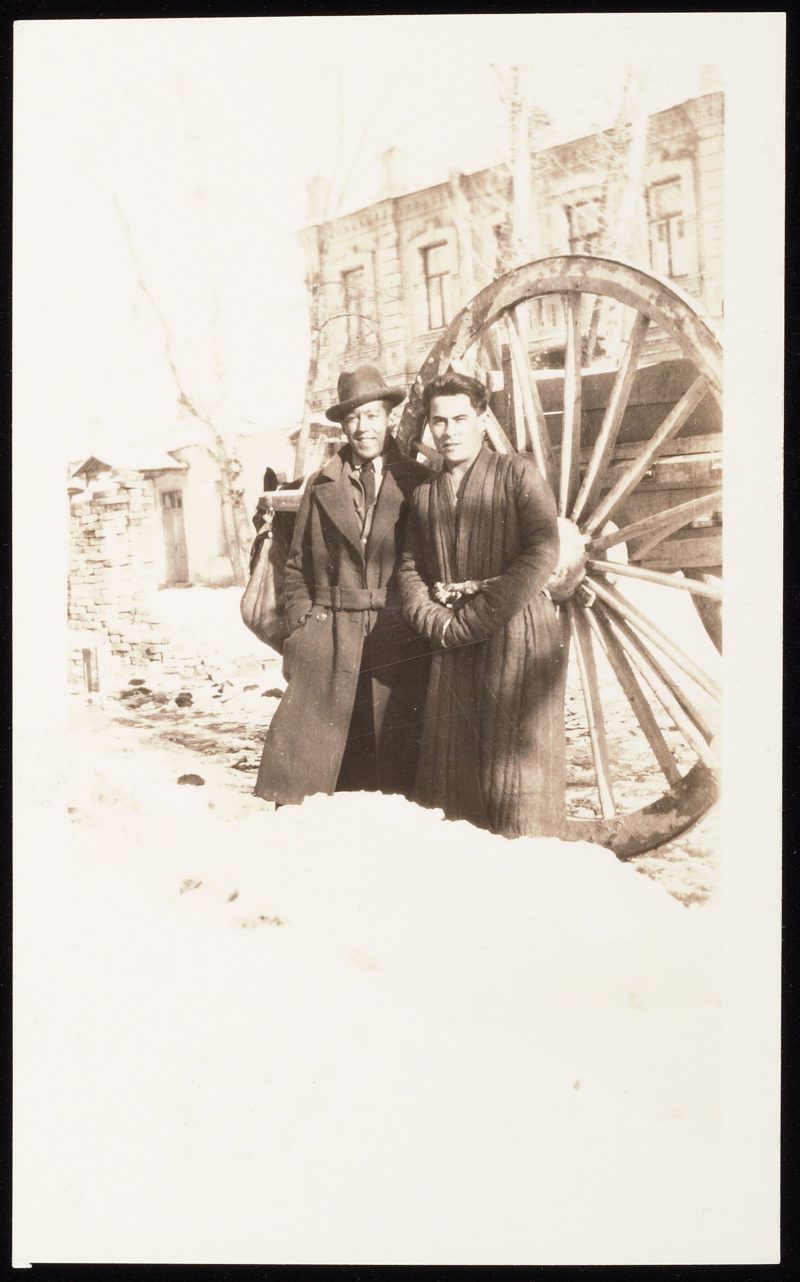 In a dusty hotel room in Ashgabat, he met the Hungarian author, Arthur Koestler, who was on tour himself to write about communism in the region. Together with the Turkmen poet, Shaali Kekilov, they visited the cotton khoiz (collectives) of Turkmenistan and, later, Uzbekistan. It was Kekilov who had brought these particular notebooks that Hughes would use for the remainder of his trip. These four notebooks, the hundreds of photos he took, and assorted notes make up a good bulk of the works in The Langston Hughes Papers archived at The Beinecke Library of Rare Book and Manuscripts, Yale University Library. 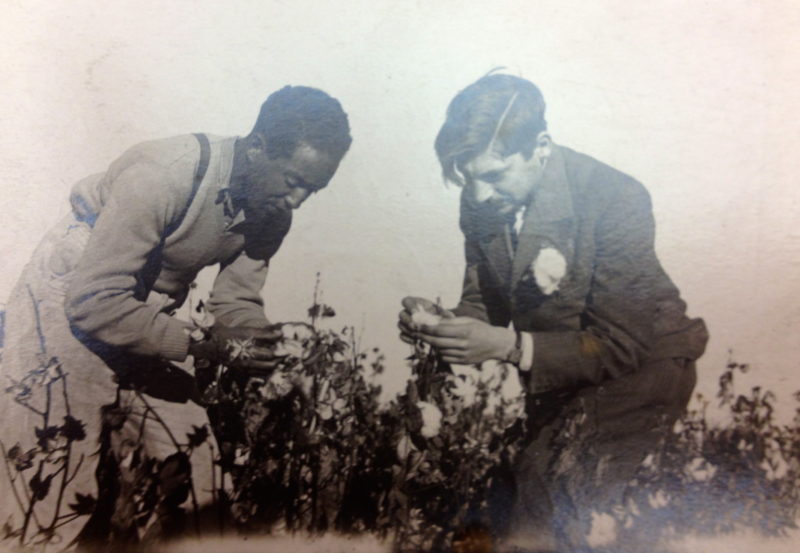 Among those collected materials, I found a loose page—a translation of a romantic poem (a duet if sung) that he simply named, “Old Uzbek Poem.” Actually, to say, “I found it,” is too easy. There was a magic in my stumbling upon it, the process of reading, of holding this manuscript moment in my hand and dwelling in Hughes’ handwriting.

As an undergraduate, I had made my money for books by reading palms and seeing the future in the stylistic idiosyncrasies of individual script. Reliving those memories in Hughes’ cursive, I read only the past in his curls, tripping over an unfinished, topless “p.” Even in the immaculate Beinecke reading room, I felt the rush of time in his diary scribblings—the way his sentences dipped down and magnified in the slight dust, on the softness of the paper. 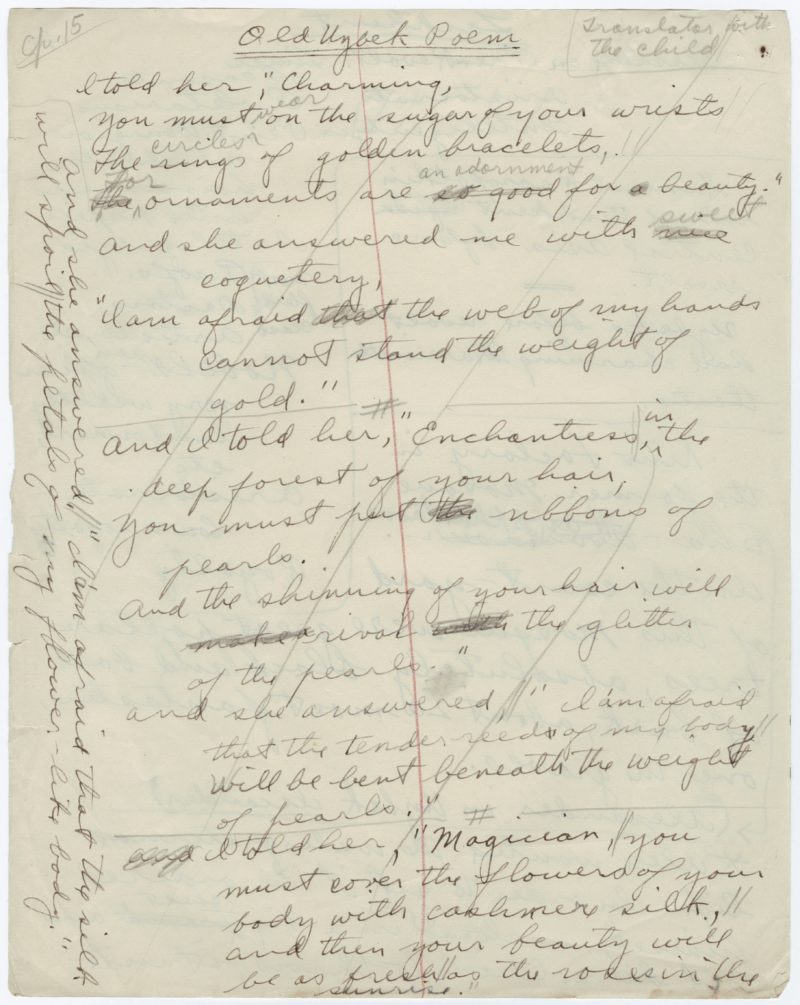 It was easy to overlook those files filled with notes, photos, and sketches at the Beinecke, categorized as they are under the wide banner “from Russia to China.” The poem that I transcribed and placed within a small cushion of cultural history was in one of those files, along with cut-up, handwritten notes reminding him of things people said or things he saw. This poem with a small, mysterious note on the top right corner, “Translator with the child,” is one of the few poems of the time period that indulges in traditional Turkestani love poetry. Dismissed by the Soviet Writers Union as an example of bourgeois nationalism, poets risked their lives to write love poems that were in a traditional poetic form traceable to Mir Ali Shir Navoi, a fifteenth century poet. The 1928 mandatory Latinization of Turkestani language, the banning of writing in the Arabic alphabet, and the imprisonment of poets who used traditional forms of Turkestani poetry meant that a tender love poem like the one Hughes translated embodies a small moment of Turkestani resistance.

The coquetry and wit of the love poem is reminiscent of Andrew Marvell’s poem, “To his Coy Mistress” and could be one of the first translations of an Uzbek poem into English.  But apart from that and even beyond the murmuring ghost of the unnamed translator, it’s Hughes’ handwriting that endeared this poem to me. In The Work of Mourning, Jacques Derrida says, “[A] signature not only signs but speaks to us always of death… the possible death of the one who bears the name… the death that thus always comes before coming.” The entire page of “Old Uzbek Poem” was a signature. Hughes’ handwriting was dense with melancholia and affected me with a longing that predated me. It is an a priori longing for a place that not even my father was born in, a memory that was not mine. 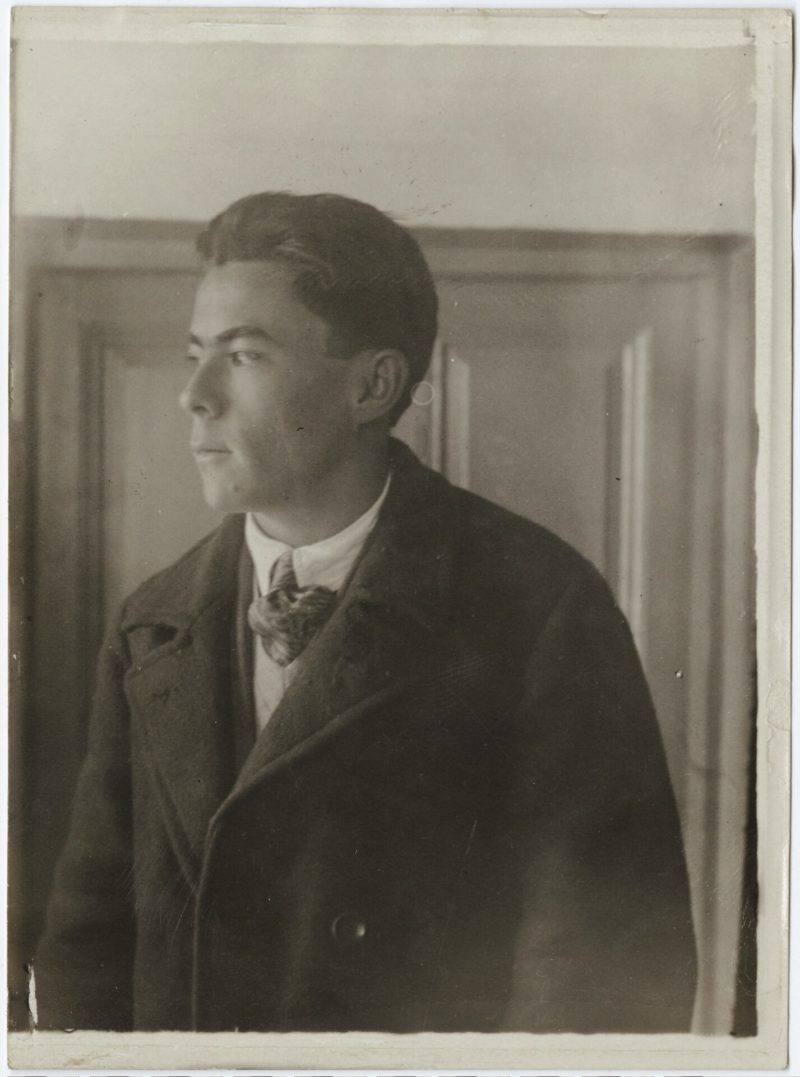 1917 marks the Bolshevik Revolution in Turkestan. It created a counter-revolution led by nationalists, a Free Turkistan Movement, or Basmachi (a word in Turkestani meaning “attackers”), that stretched as far west as Crimea and as far east as Northwest China. The battle between Bolshevik and Basmachi ended with the last battle in Bukhara in 1934. And in the aftermath of these hostilities, the Soviets continually denigrated the word Basmachi to mean “thieves,” or “highway robbers.”

My great-grandparents and my grandparents were a part of that movement. My grandfather fled at the age of eighteen and ended up in India, then Afghanistan, where my father—and later I—was born. In this time, the Turkestan diaspora had fought to maintain their linguistic integrity, meaning that we were all taught to speak Turkestani (as in pre-1930s Turkic which was spoken, with variations, from current day Crimea to Uyghuristan, now Xinjiang Province, China).

In “Old Uzbek Poem” (titled as perhaps a place holder by Hughes) I heard the Uzbek words that may have been translated for Hughes. In the second line, I wondered about the word “sugar.” Shakar is the Uzbek word that means “sugar” and shirin means “sweet.” Perhaps it was just “sweet wrists” and not the more ornate “sugar wrists.” Wherever it came from in the chain of translations, that adjective, “sugar,” reminded me that lovers are edible, the body of the beloved more shakar than shirin. I see the ghost of “Translator with the child” crouched over Hughes, whispering to him quickly as he jotted lines down in his notes, asking for clarifications. 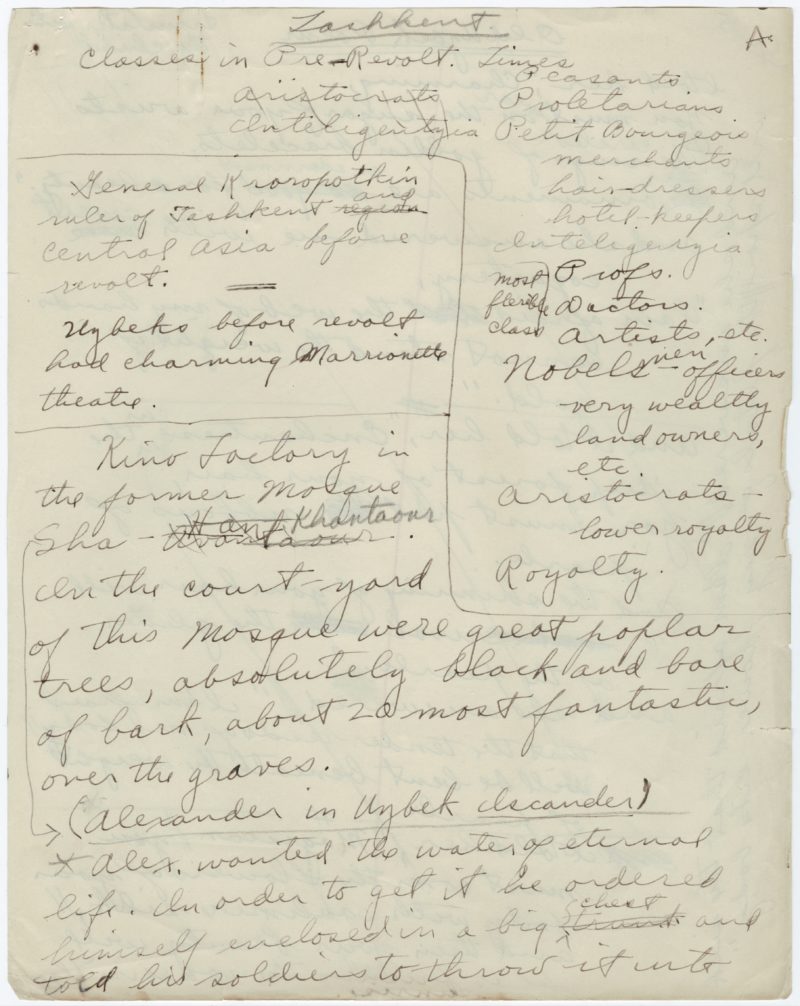 The strikethroughs stood out, and made me search for the rhythm in Uzbek. Maybe it was a song he had performed for him at one of the many events he attended? Even though the verso of this page features scratchings of history, bits of conversations, and other contexts, there are no extended notes to situate this poem. What if there had been a large gathering and, after the poem was recited, he wrote down banter, explanations? And how was it translated? From Uzbek to Russian then to French for Hughes, who then translated into English? Did Hughes realize how many Uzbek poets were killed or imprisoned for writing love poems? There are many questions here. I followed Hughes’ edits in pencil, a lighter shade than the rest and transcribed away. All edits are as Hughes left them:

I told her, “Charming,
You must wear on the sugar of your wrists
The circles of golden bracelets,
For ornaments are an adornment good for beauty.”
And she answered me with sweet coquetry,
“I am afraid the web of my hands
cannot stand the weight of gold.”

And I told her, “Enchantress,
in the deep forest of your hair,
You must put ribbons of pearls.
And the shine of your hair will
rival the glitter of the pearls.”
And she answered, “I am afraid that the tender
Reed of my body
Will be bent beneath the weight of pearls.”

I told her, “Magician,
You must cover the flowers of your body with cashmere silk,
And then your beauty will be as fresh as
The roses in the sunrise.”
And she answered,
“I am afraid that the silk will spoil
the petals of my flower-like body.”

The lacework of Hughes’ pencil edits over this note is the joy of discovery. It is the thrill the archivist experiences in the face of such treasure at the end of hours of research.

After all of his delicate markings and revisions, however, Hughes drew a line in red pencil straight down the entire page. It was if when finishing he knew that no one would publish it (the works he published after his return to Harlem were mostly Orientalized pieces—fit for Ladies’ Home Journal and similar magazines—about dancing boys and harems); with his red pencil slash, he put this poem away, put the images to rest.

I wanted to ignore this burial of the poem. I wanted to ignore Hughes’ doubts about the value and the quality of this translation. And so I took this precarious sheet of paper, followed his tracings, his marginal notes—to hold it out to you. Maybe you, too, see the magic in the chain this poem formed so it could be heard: from an Uzbek poet to the “Translator with the child” to Langston Hughes to this transcription by me, poet and great granddaughter of Basmachi.

Share this post:
Tweet
Zohra Saed is the co-editor of One Story, Thirty Stories: An Anthology of Contemporary Afghan American Literature (University of Arkansas Press) and editor of Langston Hughes: Poems, Photos and Notebook from Turkestan (Lost & Found, The CUNY Poetics Documents Initiative). Her collaborative poetry chapbook with Sahar Muradi, Misspelled Cities/Falsch Geschrieben, was published for the dOCUMENTA 13 Notebook Series in English/German. Her essays on the Central Asian diaspora and their food history have appeared in Eating Asian America (NYU Press); along with Leila Christine Nadir, she edited Interviews/Essays in “Projects by Afghan American Writers and Artists” for The Asian American Literary Review. She is the co-founder and editor of Brooklyn-based UpSet Press and an Assistant Professor in English at Bard High School Early College, Queens.

Tongue is an online literary project dedicated to challenging borders and expanding our notions of form and translation. Relaunched in early 2017, we publish poetry, essays, and visual art by way of Dispatches mailed to subscribers about twice a month.

3.2—Safiya Sinclair, Kimiko Hahn, & an essay from Zohra Saed on the travels and photos of Langston Hughes in Uzbekistan