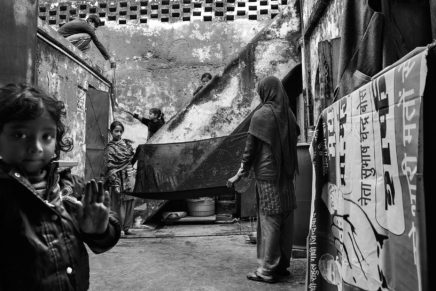 This series, “Swan Song of the Badlas,” follows the last remaining artisans of traditional mukaish badla embroidery, which flourished in the 18th century. There were once 3,000 mukaish badla artisans in Lucknow, the capital and largest city of the Indian state of Uttar Pradesh; that number is now closer to 25, all of them over the age of 65.

A republic 共和国
of bees under 下
the scalp. 頭皮。

You’ve got good ideas, like swinging our hips right

and then left. You take leadership, appreciate that.

I chase you with blue paint and you spring away.

I’ve been grilled
over my own
sadness.

…Everything
I write, a way of saying: “look what I can do

with language.” I am trying to tell you: “I miss wonder.” I wonder
if nostalgia is what we invented to name ourselves species

and mean: we once stood on the same shore.

Iʼm standing in the dust looking at you,
Not knowing whether to kneel, or lunge.